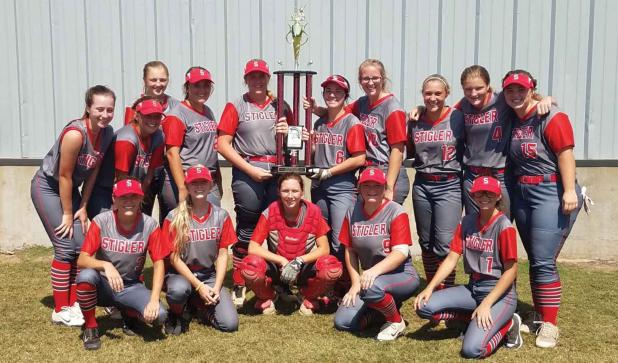 “The group played great the entire tournament! These girls are as unselfish a group as I have ever had. They just want to win, and whatever they are asked to do, they do it for the team. I am so happy for them, they deserved it,” said coach Chris Parker.

The team made only one defensive error in the four tournament games, coach Parker said. In addition, Dara Hamlin, the team’s pitcher, had 29 strikeouts and only six walks during the tournament.

Tied up with one run each in the fifth when the time limit expired, these teams go into extra innings. Each team is allowed to place a runner at second base during their turn at bats. The sixth inning came and went without a single run scored by either team. Top of the seventh inning, Quinton scores three runs. With the Lady Panthers being certain of defeat in the bottom of the seventh, they rally to score three runs, tieing the game again. The top of the eighth came and went with three up and three down. The Lady Savages were unable to score. The bottom of the eighth, the Lady Panthers were able to advance their runner, allowing themselves to score and clench the win. Final score -  Stigler Lady Panthers 5, and the Quinton Lady Savages 4.

With freshman pitcher Dara Hamlin on the mound, Stigler only allowed the Lady Eagles to score three runs. Hamlin had five strikeouts and walked none during the three innings played, only allowing four hits total.

The Lady Panthers collected 16 hits throughout the game, scoring 13 of those hits. With a final score of Stigler 13, Warner 3, the Lady Panthers continued in the winners bracket with game 3 set for Friday at 1 p.m.

Knowing the Lady Ironheads had the home field advantage the Lady Panthers came out strong, scoring two in the first inning with senior Cass Suggs and freshman Dara Hamlin both scoring, and scored two more runs in the third inning.

The Lady Panthers clenched another victory with freshman Dara Hamlin on the plate throwing a shutou,t allowing only two hits which were quickly thrown to senior first baseman Savannah Seymour for the out.

In game 3, they defeated the Eufaula Lady Ironheads, 4-0. The Lady Panthers advanced to day 3 in the winners bracket.

Eufaula Lady Ironheads would not give up so easily as they beat the Quinton Lady Savages at 11 a.m. on Saturday morning, allowing them to play for the championship against the Lady Panthers.

However, the Lady Panthers never faltered maintaining their winning attitudes. The fans packed the stands and watched eagerly as the game began.

The Lady Ironheads scored first putting the pressure on the Lady Panthers. With the score at 0-1 going into the bottom of the first, the Lady Panthers prepared to hit. Stigler would rack up seven hits and score three runs in the first inning. The Lady Panthers would not give up their lead and finished the game in the seventh inning with a final score of 8-3, taking the win.

C. Smith lead the team in hits going 4-4 at the plate. The Lady Panthers did not have a single error on the field.

The Stigler Lady Panthers went 4 for 4 in the tournament,  winning first place and bringing home a beautiful, well-earned trophy to prove it.