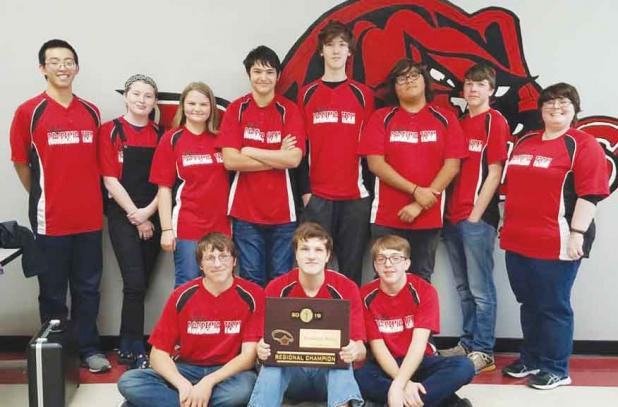 Glances at the front pages from 2019

Remember this story and photo?

The Stigler Academic Team placed first in Regionals on Saturday, Nov. 16. The team completed their varsity conference year in second place with a record of 24-3.
The team recently qualified for nationals at the Coalgate Invitational where they placed second, and member Devon Wilson was named as the top scoring player in the tournament with 500 points in the first four games.
Wilson was also awarded with All-Conference this year for the highest scoring average in the conference. Staff report

Glancing back at the front pages of 2019

The above photo and story were featured on the Stigler News-Sentinel's front page on Nov. 21.

As the Stigler News-Sentinel staff begins coverage of 2020 events in the community, we are taking final glances at the front pages from 2019.

Click on the linke below to read the Jan. 2 and Jan. 9 issues or to subsribe. In print and on online.

Staff report
Elected officials, community leaders and others are evaluating and beginning to address issues presented in an action plan for continued economic growth in Haskell County, which stresses the importance of working together in order to reach goals.
“Forward,” an Action Plan For Economic Development was presented in Stigler last week by Jim Fram, founder of Community Growth Strategies.
The meeting was attended by elected officials throughout the county, business owners, representatives of the Stigler-Haskell County Chamber of Commerce, representatives from the Choctaw Nation and the Oklahoma Department of Commerce.
“You’ve got a whole lot of things going for you,” Fram said at the beginning of his presentation, adding that the goal of “Forward!” was to discuss issues that can help take Haskell County to the next level.

By Laura Hulsey
Staff Reporter
The Shop Stigler drawing took place on Dec. 21 at the courthouse gazebo.
Stigler-Haskell County Chamber of Commerce director, Janice Williams, along with Edie Price and Marsha Oldham gave out the prizes for the event.
“The Chamber members and I are so proud to be able to provide the Shop Stigler Cash Drawing each December.” Williams said.
The event had three prizes which consisted of a $1,000 first place prize won by Susan Strain of Stigler, a second place prize of $500 won by Denise Kennedy of Keota, and a third place prize of $250 won by Jennifer Thompson of Stigler.
“Congratulations, Merry Christmas and may 2020 be filled with peace, joy, and prosperity.” Williams said.

Staff Reporter
This Christmas, the Stigler News-Sentinel was in charge of providing the community with the annual Angel Tree.
With help from the community and Stigler High School Leadership Club, the Angel Tree was able to donate toys and clothes to 247 children in the Haskell County area.
“The Haskell County Angel Tree was a complete success. We were so pleased with how well it all came together.” Summer Long, this year’s Angel Tree director, said. “I am so grateful for the Stigler News Sentinel staff and the Angel Tree Committee for working so hard and keeping up spirits and smiles. We will be placing a thank you ad in our paper after the first committee meeting in January and are looking forward to next year's Angel Tree!”