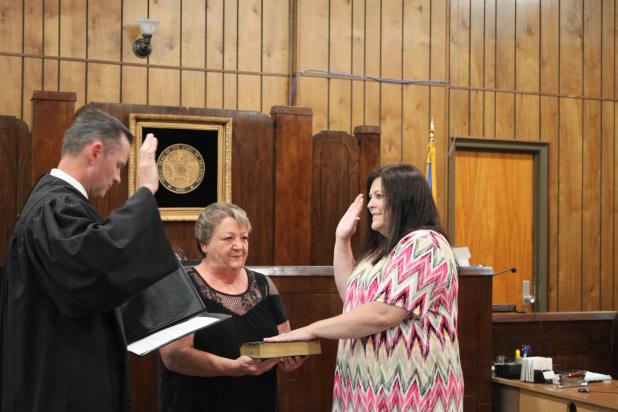 Dixon said when she began working in the Haskell County Treasurer’s office, she was just looking for a better job.

Leo Reasoner, a county commissioner, helped her initially get hired to work in the county treasurer’s office.

“He just put in a good word for me, and Reba (Kennedy) hired me,” Dixon said.

She was employed in the office when the county treasurer announced her plans to retire, and told county commissioners she wanted one of the staff members from the treasurer’s office to be appointed to complete the remaining one year of the term. Dixon said she accepted the appointment only after commissioners, at her request, asked the other employees in the treasurer’s office if they were interested in the job. She said that since the other staff members had been working in the office for more years, she believed they should be offered the job first.

After being appointed to complete the term, Dixon then ran for the office. There have been a few changes in the treasurer’s office during the past 34 years. The change that affected the office the most was the addition of computers, Dixon said.

“We did everything with pencil and paper, down to collecting taxes,” when she first began working in the office, Dixon said. The taxes were written up as individuals came in to the office. “Then we had all the big tax rolls that laid across the front. Then, when you collected the taxes, you had to also go to the books and post the taxes as being paid, while people are standing here waiting for you to do all this.”

Only three people worked at the front counter, due to available space. The process of collecting taxes required a lot of time.

“That was every year,” she said. “We did not mail out taxes, so no one could pay by mail like they do now.”

Everyone, with the exception of property owners who lived out of the area, were required to go to the treasurer’s office to pay taxes. Individuals would often have to stand in line for two to three hours to pay taxes, she said.

Dixon said she has worked most of her life and she knows retirement will require an adjustment. She has projects to complete around the house, and she enjoys gardening, working in the yard and quilting. She was at the county courthouse on her first day of retirement, holding the Bible as Gayla Orr was officially sworn in as the next Haskell County Treasurer.

She won the Haskell County Primary Election in June 2018 and did not have an opponent in the General Election in November. Orr said she has a lot of respect for Dixon and she will miss working with her.

“She’s always been my right hand,” Dixon said. “I could always depend on her.”

Dixon filed to serve as treasurer for seven terms, and had opponents only twice - the first time and the last time she filed for office.

“I feel very blessed about that,” she said, adding that she has seen a lot of turnover in the county offices. Dixon added that she wanted to “stress how much I do appreciate the people in Haskell County trusting me to hold this office for as many years as I’ve been here.”

Publisher’s Note: County treasurers in Oklahoma are sworn into office the first Monday of July following the General Election that is held in November of the previous year.

Top photo: Gayla Orr takes the oath of office as it is administered by Associate District Judge Brian Henderson on Monday, July 1. Orr was elected Haskell County Treasurer in June 2018. Gale Dixon, whose last day as county treasurer was Friday, June 30, is holding the Bible.

Bottom photo:  Associate District Judge Brian Henderson presents Gale Dixon with a plaque in recognition of her years of service to Haskell County. Dixon was Haskell County Treasurer for 29 years and worked in the treasurer’s office a total of 34 years. The plaque was presented to Dixon during a retirement party on May 24.